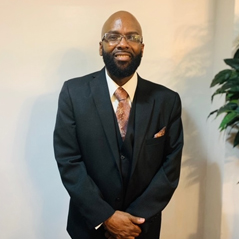 Elder Elliott DeCarlos Tatum was born and raised in Sampson County; a native of Roseboro NC. Elder Tatum is the son of Ellis Tatum Sr. and Belinda Tatum. Elder Tatum is the oldest of five siblings (four brothers and one sister). His parents raised him in the church at an early age where he was taught to be respectful to his elders, genuine, and compassionate; these characteristics have allowed him to become a great man of God.

Elder Tatum graduated from Lakewood High School and later graduated from Fayetteville State University with a major in Biology and a minor in Chemistry. He later pursued his dream of becoming a QA Specialist with intent to manufacture vaccines. He currently works at Seqirus in Holly Springs, NC where the Flu Vaccine is manufactured and administered to patients world-wide. Elder Tatum has spent over 19 years in the pharmaceutical industry, working in various areas within the biotech industry. God has called Elder Tatum in the highest calling of Pastor. Elder Tatum has been preaching the gospel for over 12 years and has been pastoring for 7 years.

God blessed Elder Tatum to find a wife that was suited just for him; First Lady Prophetess Evangelist LaShaunta Tatum. They have been married for 17 years. God brought them together to develop a new league of worshippers and together prophetically they work as a team to destroy the plan of the enemy. They truly believe in the power of prayer for prayer is a mighty strong weapon against the enemy. Elder Tatum is a family man and he believes that everything starts at home. Elder Tatum firmly believes that if you have a well centered home, you are able to set an example of order in the house of God. In addition to setting an example of order, he is raising his two children Michael and Aylin Tatum to put God first in their lives. Michael, the oldest (son) is a member of the Youth choir, Men’s choir, and Youth Praise team and Aylin (daughter) is a member of Youth choir and Youth Praise team.

God quickly called Elder Tatum into the ministry. He chose him to preach sound doctrine and to raise up a people through the spirit to serve God with their whole heart. In his current role as a Pastor, the vision is to move God’s people to the next level. Habakkuk 2:2 says, “And the Lord answered me, and said, Write the vision, and make it plain upon tables, that he may run that readeth it”. “Run on Christian Soldiers and Fight the good fight of Faith until our Heavenly Father calls us home”!